Medical gas piping systems are important in almost every modern medical setting. Hospitals typically require a comprehensive gas distribution system that must be tied into the building’s plumbing system. However, because these gases are so vital to the well-being of patients, medical piping must also work flawlessly and efficiently. Any defects in a medical gas system can result in injury, or worse, to patients. Therefore, it’s extremely important to hire an experienced installation team that understands how to properly install and test medical gas systems in your facilities. At Hickory Mechanical our staff of engineers and installers have a proven track record of installing medical gas systems for medical facilities in North Carolina and surrounding states.

Almost all medical facilities require a clean supply of compressed air that is sterile and without oils or other liquids that can cause contamination. Medical air is also used to power many medical tools during procedures.

Medical professionals use oxygen to resuscitate patients and during repertory therapy procedures. However, it is also used in other vital medical procedures such as traumas, respirators arrests, and other life support measures.

Carbon Dioxide, or CO2, is used during many less invasive surgical procedures such as an endoscopy, arthroscopy, or laparoscopy. While Carbon Dioxide is piped in for large hospitals, most medical facilities store it on site in a tank.

Medial Liquid Nitrogen comes in a compress air form and is used in the removal of skin lesions, skin tags, and every some forms of cancer. This form of nitrogen is several hundred degrees below zero and will freeze any tissue it contacts.

Nitrous Oxide, aka laughing gas, was traditionally used by only by dentists.  However, because this gas is both an anesthetic and analgesic, it’s also currently used in many other types of medical procedures. 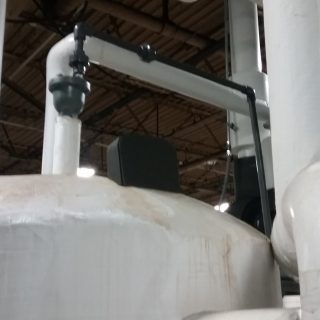 Hickory Mechanical’s current project at Technibilt will be in completed in 3 phases. This is phase 1 of 3 installing heating, air conditioning, and filtering. Find us on FaceBook at Hickory Mechanical, Inc. for additional pictures from the project along with updates!